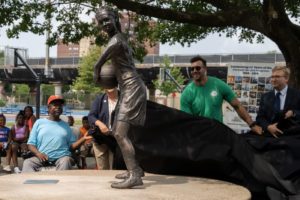 Calling all children: Philly has a new bronze statue. Standing 5 ft. 4 inches tall and modeled in the image of an African American middle school girl, the statue erected on July 31, 2019 has been dubbed MVP. She has a fierce competitive look on her face, which to me is similar to the look on the face of Fearless Girl in New York City. Although the statue was inspired by Ora Washington (1898-1971), a local athlete, she represents strength and heroism of all children who face adversity.

The statue, which stands on a cement circle, elevated off the ground, can be found at the Smith Playground and Recreation Center in Philadelphia. What sets the statue apart from the 1,500 other statues in Philly is that she’s the first woman. When the sculptor Brian McCiutcheon won the competition to erect a statue funded by the Philadelphia Percent for Art Program (whenever the city spends over a million dollars on  renovations it must earmark money for public art) he decided to fashion the sculpture so it represented the people who use the park, often populated by local kids engaging in athletic endeavors.

The statue is beautiful; she’s holding a basketball off to one side while caught in the middle of the game where she’s in the process of intense decision-making. Will she make a pass or take a shot? While MVP is portrayed as one lone player, our minds fill in the blanks. We see a team on the court, eagerly awaiting her next move. But we also see her guarding unseen opponents (just like in real life).

What else can we see in her future? As one young girl of color says, “She looks like me.” And that one statement has the potential to inspire a nation to greatness. “If she can do it, so can I.” I haven’t see the sculpture. It was referred to me by a former colleague who lived in the area, but I hope to visit her one day with my grandkids. I want them to see firsthand that all it takes to get “chiseled” is some grit, teamwork, and the ability to make the next move even when it’s not visible to others.

One more statue to help dot the landscape with monuments of women. Bronze power! Women Rock!