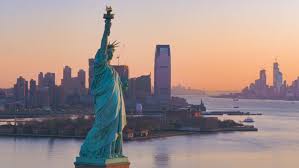 I couldn’t write a blog about statues of women without including the Statue of Liberty. Born in New Jersey and raised in New York, I was fed on the statue’s notion of liberty. She has always been a beacon of freedom, a gigantic feminine representation of the power of women, at least that’s how I always saw her. I can’t even refer to Liberty as a statue as I have with all of the others, because to me she has a heart. As such, I will refer to the state as she or her from now on.  Ask any New York and they’ll tell you she’s the real deal.

Without boring all of you with a litany of historic facts, I’ll highlight a few points. She was created by Frederic Auguste Bartholdi, and wasn’t a gift from France to America as most people believe, but a pitch from a statue maker. Funded in part by Joseph Pulitzer who saw her as the potential gateway into America; a welcome mat in the shape of a women. I can’t remember the first time I saw her, but to me, she was always a vison of green, a goddess holding her own against New York city skyscrapers and expansive bridges. She always signaled an “Almost home” feeling. “Hold on,” she’d say. “Just a little while longer.” There a lot of discussions as to who she’s modeled after. Some say that her face was fashioned in the likeness of the sculptor’s mother.  Others suggest the statue was originally designed as a lighthouse slated for the Suez Canal, so her image, including her shrouds and sandals were that of an Arab woman. But others claim she’s designed after the goddess Literatus, and the seven spikes of the crown represent the seven oceans and continents. But does it matter? She’s glorious and beautiful regardless of her ethnicity. Or is she wonderful and spectacular because of her diversity?

I remember the first time I visited her on Ellis Island. I was about seven and my mother decided I was old enough to ride the ferry and climb to the top. What struck me as small child was her immensity. I knew she was tall. I could see that even from long distance. But it’s one thing to stand in front of her, all 305 feet of her, from the base to the torch, including the pedestal on which she stands. All statues need a pedestal, it’s what gives them their grandeur. I was able to read a few lines of Emma Lazarus’s epic poem. “Give me your tired, your poor, your huddled masses yearning to be free.” Even at age seven I was a prolific reader. My mother had given me the immigration speech so I knew that twelve million people, who were essentially homeless, had entered America and were welcomed by Liberty. My mother told me that my Irish relatives were parts of the multitudes. As a child I didn’t have trouble climbing to the top as I would in later years, but the view was insurmountable.  Heavenly is the word that came to mind. Roaming around the crown was like walking in a cloud of hope.

If you don’t live in New York you can visit replicas elsewhere in Tokyo, France, Norway, Ukraine, Brazil, Denmark and Seattle to name a few places. They say imitation is the highest form of a compliment. Women Rock! Help the statue’s message of liberty cast a wider net. Start a campaign so you too can have freedom in your backyard. What are you waiting for? We can never have enough liberty, and justice, for all.