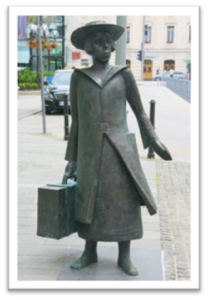 “Me? I am happy because my heart is the base of your heart. I do not belong to people who are grimly staring into their own cloud and turn it in such a way, that I can only see its brighter parts.” Alma Karlin (in Isolanthis)

I came cross this bronze statue of Alma Karlin, one of the greatest female travelers of all times, while watching an HGTV International episode about Slovenia. Alma makes an impressive statue and an even more compelling character. I took notice. I hope you will too.

Born in 1889, Alma traveled the world alone. Between 1919 to 1927, she explored the Americas, the Far East, Australia, Hong Kong, and Fiji. Although she wrote about her exploits in German (see “Odyssey of a Lonely Woman”), she learned nine other languages during her travel escapades. People who knew her considered her to be a free-spirit who roamed the world crossing boundaries, literally and figuratively. When I think of Alma, a petite woman with big ideas, I envision a woman with a mind of her own. Although called quirky, she was a nomad of geographical vastness; a researcher who explored the depths of the human soul. While traversing the globe, she collected a wealth of ethnological materials, some of which can be found in the permanent collection in the Celije Regional Museum.

The statue, erected in 2009, was unveiled in 2010 in memory of the 60th anniversary of her death, and 120 years after her birth. Alma’s life-sized statue is sculpted wearing a hat and coat, and carrying a huge suitcase, all of which represent her on-the-go personality. It is said that the sidewalk, on which the statue sits, is moving. She has a no-nonsense look on her face. Her arm appears in such a position that at any minute she might lift it to hail a taxi.

How nice it must be to be revered as a traveler; a globetrotting woman who smashed conventional roles. She is truly a woman who should be memorialized in stone, for all eternity to remember. Rock on Alma!