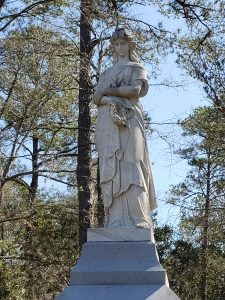 IF you’ve been following this blog, you know that Fearless Girl is a favorite of mine. I even have a children’s picture book in process. But recently, following the death of Ruth Bader Ginsberg, someone has draped a white lace jabot, or what has become fashionably known as a  “dissent collar,” around the neck of Fearless Girl.

My mother had a white beaded collar in her jewelry arsenal that I inherited when she passed away. Whenever I wore it, people stopped me in the street to comment on it’s uniqueness. It made me feel like royalty. Now whenever I use it to adorn my black clothing, it will also remind me of RBG.

Good news: a statue is planned in the likeness of New York’s very own Notorious RBG. Governor Andrew Cuomo announced that a statue will be built in her native Brooklyn. The statue will serve to memorialize the many contributions she made in the area of gender equality. According to Mr. Cuomo, Ms. Ginsberg “gave voice to the voiceless and uplifted those who were pushed aside by forces of hate and indifference.” As soon as its unveiled, the statue will be featured in this blog, hopefully with a personal visit and photo.

Ruth Bader Ginsberg has been an inspiration for many fearless girls, who when faced with adversity also pushed onward and upwards against gender discrimination. She will be missed. And if you asked me, Fearless Girl has never looked braver.