When I started this blog I focused on statues of women who had been memorialized in bronze, marble, glass, silver, or any other long-lasting material. I concentrated my efforts on raising the awareness to the disparity between the number of men who’d been chiseled when compared with the amount of women. Not surprisingly men statues outnumbered women by more than an 8:1 ratio. But recently I came across two other ways women can be memorialized, at least temporarily, as in the case of Living Art or with a bit more longevity as seen with the use of animatronic or extreme puppetry.

One example of extreme puppetry is Little Amal. She’s a 12 ft. tall giant specimen (Think War Horse) that’s used in a performance art program called, “The Walk.” Amal, which means hope in Arabic, symbolizes a 10-year-old girl who travels alone across the world in hopes that she can be re-united with her mother. Amal is a mobile representation of immigration; asylum seekers, marginalized and displaced people, often as a result of genocide, poverty, war, and outright hatred. Mostly, Amal’s been met with warm embraces but since mankind is not always kind nor tolerant of differences, instances of outrage have erupted. Such a shame.

I use Amal as an example of re-thinking bronze statues as the only way to highlight women. Certainly, a 12-foot puppet gets people talking. One advantage is she’s able to come to you. The disadvantage is that she’s homeless. She roves, moving from one temporary home to another. She recently spent three weeks in NYC and landed at the United Nations. If you’re lucky enough to be in the area when she visits, make every effort to see her. You won’t be disappointed. Her “people” are planning future events for 2022-23.

Amal is eye-catching and has a look of sincerity that draws spectators to her. Visitors say they can “feel” her strife and spirit. Some say they’re compelled to touch her, hold her hand, walk with her, and tell her how brave she is. She inspires tears of resilience and hope. Statues can do all these things too but for some reason we back off from revealing our emotions to them.

Maybe we shouldn’t. Next time you visit the statue of a woman of substance, put your arm around her and tell her how wonderful, wise and remarkable you think she is. I like to think she’s listening.

Examples of human statues can be found in cities or special events. But at first glance, you might walk right pass them, especially if you’re not paying close attention.  I saw Marie Curie in Edinburgh on the Royal Mile just outside Edinburgh Castle. From afar, she appeared to be a bronze statue and even as I got closer, she still appeared to be lifeless. But when a man put some money at her feet, she slightly altered her position. She stayed that way until another person offered money. But if nobody offered her cash, she stood absolutely still. I got close enough to see that her face, neck and hands were covered in professional theater makeup that allowed her to appear bronzed, with a light green patina. Her clothing was also of professional quality- a costume, dyed and stiffened to look like metal. Further down the road, we saw King Henry V111and then while in Stratford-Upon-Avon, we discovered Shakespeare, covered in what looked like white marble. For a pound, he’d perform a line of one of Shakespeare’s more famous plays and then when the line ended, he went back to his lifeless shape.

These human statues boggled my mind. I wanted to know how someone could transform themself from a living, breathing human into a lifeless block of stone. I watched a You Tube video and saw a woman transform herself into a statue. Still, how could she suspend motion and stay so still for so long? How are the costumes made and what kind of make-up was used (google YouTube videos and you can find out for yourself). But this Living Art medium got me thinking. First question, the performance artist could’ve selected any famous woman to turn into a living word of art, what made her choose Mare Curie? Secondly, can you imagine using this art form for the greater good of the matriarchy?

First question: Why did the performance artist pick Marie Currie?

Was it because she already had a statue in Poland and that made it easier to copy? Or did she close Marie because she was awesome. That would be my reason. Face facts, Marie inhibited a great scientific mind, extreme bravery under potentially fatal conditions, and had keen intellect; the stuff legends are made of.

Here are a few tidbits about Marie. She was born in Warsaw, Poland in 1867 but left for Paris in 1934 to continue her scientific studies. She met Pierre, her Professor of Physics, and married him. They worked together, mostly in laboratories, where they handled radioactive materials, until his death in 1906. She then resumed his position at the Sorbonne.

Marie participated in research that led to the discovery of radioactivity, radium and polonium. In 1903, she along with her husband and Henri Becquerel, received the Nobel Prize in Physics. She received the Nobel Prize again in 1911 (alone this time) for Chemistry. She died in 1934 of aplastic pernicious anemia, a condition often found with longtime exposure to radiation. Her achievement in radioactive materials led to cancer treatments that have saved millions of lives.

“Nothing in life is to feared. It’s only to be understood.” Marie Curie

Second question: Can you imagine using this art form for the greater good of the matriarchy?

I can. Imagine all the exhibits and celebrations of women, alive and long-passed but still relevant, that could take place throughout the United States. As we speak there’s a campaign to create and erect a Women’s Suffragette Memorial on the National Mall. In the meantime, there could be a Living Art display of Susan B. Anthony, Madam C.J. Walker, Elizabeth Cady Stanton, Sojourner Truth, Harriet Stanton Blatch, Ida Wells and Alice Paul adorning the mall. Can you imagine the human statues, in their bronze finest, giving speeches and bringing the memorable women to life. I can almost hear the wonderful conversations they could have with each other.

To steal and then paraphrase a line from Field of Dreams, “if you build it, she will come.” Yes, we need plenty more monuments of the matriarchy to dot the landscape with women of substance, but for the short term, we could fill in the gap with animatronic puppets or Living Art.

We’re women, we can make this happen. 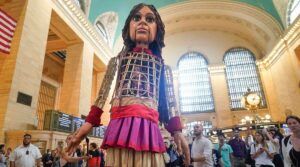 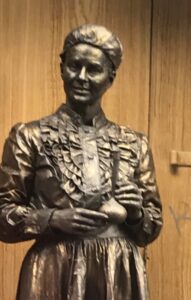 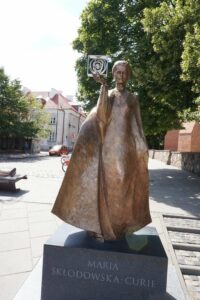