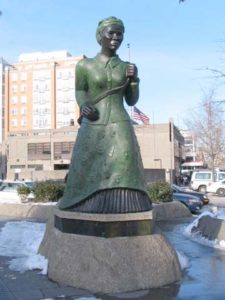 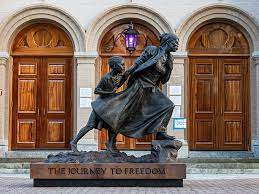 ” I was a conductor of the Underground Railroad for eight years, and I can say what most conductors can’t say- I never ran my train off the tracks ad never lost a passenger.”

People are asking me how I pick the statue I write about. I reply by saying, “the statue usually picks me.” Most of the time I’m going about my business when- there she is- my next chiseled woman. Often I find her when I’m researching another project, reading a book or magazine, watching TV or a movie, listening to a podcast or talking to friend when I stumble upon an amazing woman that needs to be recognized. Let’s just say Harriet loomed large and I couldn’t ignore her.

She is one of the few females in history whose presence can now be felt everywhere. She’s embedded in the fibers of our history, and if you listen you can hear her shouting, “slavery is the next thing to hell.” I have a feeling that people are listening. Statues of Harriet Tubman are cropping up; they can be found stretched west through Indiana, Iowa and Michigan; north through Pennsylvania, New York, New Jersey, Maryland, New England an even into Canada; and south to North and South Carolina and into Arkansas. A preliminary search for Harriet Tubman statues found nine, but everyday another state is making a pedestals for her as we speak. As they should be.

North Carolina, the state in which I now reside, has two statues that I know of. One is a bronze statue in Sylva, which replaced Sylva Sam, a white, southern member of the confederacy.  Replacing white males with women, and especially women of color, seems to be a national trend that is finally catching on. There’s another statue in Halifax, known as “Journey to Freedom,” which is part of a museum collection. The bronzed statue was commissioned privately and was created by sculptor W. Wofford.

My home state of New York has a few statues of Ms. Tubman. One can be found in Harlem. “Swing Low,” a larger-than-life statue, designed by Alison Saar, has found a home in Manhattan. Ms. Saar depicts the abolitionist, conductor, spy, scout, nurse, guerilla soldier as the formidable giant she was.

Harriet, code name Moses, was an incredible woman. Illiterate her whole life she led approximately 70 enslaved men to freedom. But her endeavors didn’t stop there. She went on to fight for women’s rights, cure dysentery using her knowledge of herbal medicine, lead a combat assault and serves as a miliary scout.

Some say she was unstoppable. A born leader who never gave up, Harriet lived to the ripe old age of 91. She’s a role model for anyone who thinks that one person can’t make a difference. We need more women like Harriet. But we also need more of Harriet, bronzed and proud. When you look into her eyes, you know you’re looking at a woman of greatness.

One statue changes the landscape. Thousands of statues change the world”