On June 19, 2021 my son got married at the Glenora Winery in the finger lake region. In case you’re not familiar with the area, not only is it ripe with award-winning wine, lovely wedding venues and gorgeous crystal-clear lakes, it’s also steeped in abolition history and accounts of the suffragette movement.

Located in Seneca Falls, NY (halfway between Rochester and Syracuse) on the banks of the Seneca River stands a statue of three women, knowns as major forces in the fight for securing the right to vote for women. As the story goes, on May 12, 1851 (three years after the 1848 historical convention, reported to be the birthplace of the suffragette movement), Amelia Bloomer introduced Susan B. Anthony, a teacher and temperance advocate, to Elizabeth Cady Stanton, a homemaker and a supporter of women’s rights. And the rest, they say, is history.

When you look at the bronze statue, you notice Amelia Bloomer as the one with the short dress. Underneath she’s sporting “bloomers” which later became the attire for the movement. The statue, commissioned for the 150th anniversary of the 1848 convention, was sculpted by Ted Aub who depicted the easy relationship between Stanton and Anthony. Upon meeting, the two women quickly developed into a workable team, with Elizabeth doing most of the speech writing while Anthony watched Stanton’s children. Anthony then travelled across the country delivering the speeches in pursuit of equality between race and gender.

Stanton and Anthony were both influential women in their own right. Unfortunately, neither of these women lived to see the 19th Amendment ratified.  The 19th Amendment, which gave all women the right to vote, became known as “The Susan B. Anthony Amendment.” Nearby is the Women’s Rights National Historical Park and Elizabeth Cady Stanton’s house as well as the National Women’s Hall of Fame.

Keep your eyes open. Monuments of the matriarchy can be found everywhere. Not as many we I’d like, but if you look, they can be found in unexpected places. A trip to a wedding also morphed into a timeless adventure down the path of women’s rights. I was so in awe of the statue, I forgot to snap a picture of me with the trio. Don’t make the same mistake. 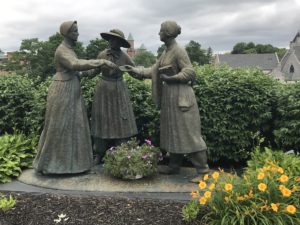