When I first read about Mary Seacole in a New York Times Book Review article (“Nursing Grudges” by Linda Villarosa; October 2, 2022) she reminded me of a character in my unpublished historical fiction/magical realism manuscript, Waving Girl’s Last Stand (see novel except on this blog under “short stories”). Irvana is a fictional root priestess on one of the barrier islands outside of Savannah, Georgia where she found solace as a free woman after the civil war ended. In the manuscript, Irvana teaches real life Florence Martus, AKA Waving Girl about holistic healings using roots, herbs, flowers, potions, and other natural ingredients to treat injuries and illnesses. Oddly, Mary and Irvana would’ve practiced holistic medicine around the same time, yet miles apart. It was if Irvana had left Savannah, stepped off the page and then found her way to Jamaica, England and then Crimea (now part of Ukraine).

Note to self. Don’t let anyone tell you your characters don’t seem real. Enough about me.

Mary— born to a white father and a mother of mixed race –  was one of the few people of color to escape slavery in Jamaica in and around 1815. She watched her mother and other Jamaican women tend to the sick using holistic healing approaches. In 1820, Mary went to London, married and was soon widowed. But it was in 1851 during the endemic cholera outbreak of 1851 that killed about 200 people a day where Mary honed her skills. It was her combination of a good bedside manner, quick thinking, applied knowledge of herbs and a kind disposition that got Mary noticed.

In 1854, her healing journey led her to the Crimean War where she acted like a field medic treating men on the battlefield. It was her heroic efforts that saved men that without her stalwart assistance would’ve died. It’s here, in Crimea, where she met Florence Nightingale. You see, Florence wasn’t the only nurse who rose to fame during the Crimean War. Although Mary was well-loved and respected, she was eclipsed by Florence, a white woman. Florence deserves her due, no doubt. She created the first pie chart and established the first makeshift mobile hospital. But the popular consensus now is that the world is big enough for two female heroes. Yet there are still those who disagree; now and then.

Can you imagine how difficult it would’ve been for Mary, a woman of color, to make this kind of progress? When she first requested to volunteer as a nurse overseas, the government blocked her path at every turn. You could say they stonewalled her. But you can’t keep a strong woman down. She financed her trip to Crimea with her own money

Mary was able to find a way to publish her memoir, “Wonderful Adventures of Mrs. Mary Seacole in Many Lands.” Publishing evades many people. Yet Mary was able to overcome numerous obstacles and become one of the first women of color to publish a memoir in the UK. With the publication of her book and word-of-mouth praise, she became something of a celebrity. Some would even call her a legend. Yet today when her statue was finally erected on the same grounds as Florence Nightingale, the historic hoopla between Florence and Mary continued. Florence’s fans objected to Mary’s statue, saying that she wasn’t even a trained nurse nor was she a Black woman. Gossip about her paternity erupted. Naysayers do what they’ll always do. But we won’t let them rain on our parade of monumental women.

If you want more information about Mary Seacole, check out, “In Search of Mary Seacole, The Making of a Black Icon and Humanitarian” by Helen Rappaport. You can also visit her eight-foot statue, unveiled in 2016 in Lambeth, England at St. Thomas Hospital. The statue created by Martin Jennings is a stunning work of art. Slung over her shoulder is a medical bag. Mary is sculped in motion, the same way she lived her life. You’ll notice that the background of the statue is a stone wall. It reflects that way she was stonewalled throughout her life. But she’s not deterred, not one bit. Mary walks right past the stone wall, as if it doesn’t even exist.

Strong and determined woman prevail. Let’s continue to bond together as women, as humanitarians, and erect more monuments that highlight the wonderful achievements of women along the historic timeline. 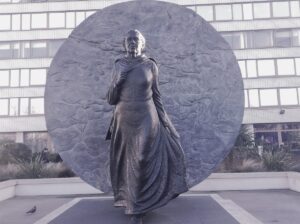