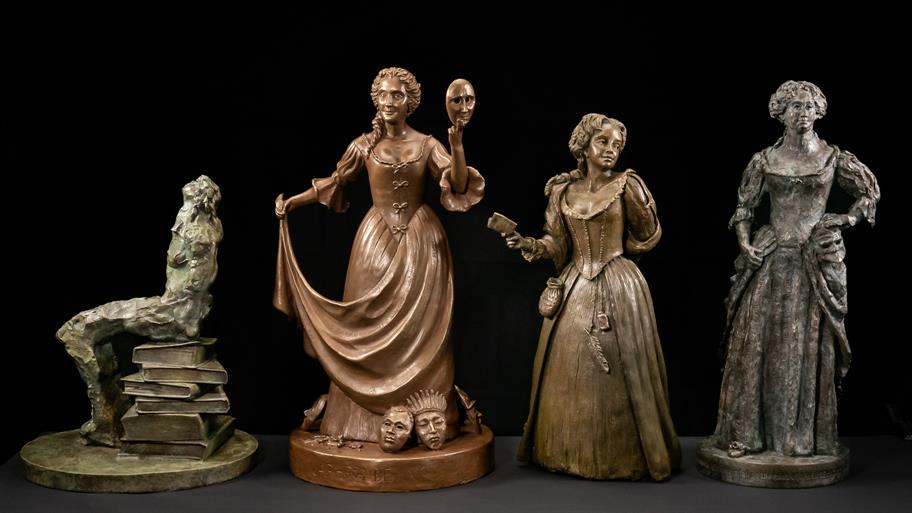 “Here lies Proof that Wit can never be Defense enough against Mortality.” (Epitaph)

Born in England, Aphra is credited as being the first professional woman writer of the English language because she was the first of record to earn a living by writing; unheard of in those times. She is also considered to be the most influential dramatist of the late 17th century. Her plays, penned during the period of time knows as “The Restoration,” were considered scandalous because they mocked Puritan values and ideals. The naysayers of her work also tried to discredit her personal life by saying that she “practiced what she preached.”

Ms. Behn caught my attention because at the end of August 2022, I will be visiting England, Scotland and Wales (finally, after numerous COVID cancellations) and have been on the lookout for statues of the matriarchy. Just my luck, the town of Stratford, England has four miniature statues of her on display. They’re located in the foyer of the Royal Shakespeare Theatre. Right now a contest is in place where viewers can select their favorite miniature which will later be sculpted into a life-sized statue that will be displayed in Canterbury where Aphra grew up. At long last!

Best known for her literary innovation, especially the play Oronooko or Royal Slave, which is described as an early “novel” (novels as we know now didn’t exist then). Oronooko is based on her years in Surinam, a Dutch colony, where she became a critic of slavery (from the word slav) and colonialism. Her other works include; The Disappointment, The Rover, History of a Nun and Love Letters Between A Nobleman and His Sister.” All totaled, she wrote 19 plays and numerous other works, as well as volumes of poetry (some under the name “Astrea.”)

Then there’s case of her being a spy (which wasn’t unheard of in those times: many a young woman in hard times was used to spy on men). She was said to have been widowed and when she found herself in debt, a known loyalist recruited her to serve as a “honeypot” and spy on a man in Antwerp.  Her code name was Astrea (named after the Greek goddess of innocence and virginity). It’s also speculated that she was employed by Charles 11 who paid her transportation back and forth to London.

Working as a scribe in London, she later became a member of Grub Street publishing and thus began her career in playwrighting (There’s a movie to be made here, for sure). The concept of sequels can also be attributed to Aphra as most of her work was serialized.

She died at the age of 48 and is buried in the Poet’s corner of Westminster Abbey. Yes, that’s correct. However, according to records after her death, her work was minimized and tossed aside. On her death, a poet friend warned: “Who will fill the Vacant Throne? Men cannot be left to regain the Power.”

Unfortunately, men did resume the patriarchy and silenced her work.  Not much had been written about Aphra until 1929 when she was vetted by Virginia Woolf, who called her a feminist mother. This is her tribute quote:

“All women together ought to let flowers fall upon the tomb of Aphra Behn, for it was she who earned them the right to speak their minds.”

Wow! Aphra Behn is impressive. A feminist, a playwright & poet, and a woman with a “No holds barred” philosophy. She deserves to have a statue carved in her likeness for all the world to admire, even if it is posthumously. While she is often studied in academia (mainly in Great Britain) many American women are unare of her greatness. I hope to snap a photo with her so I can add it to the blog. I admire the tenacity she showed as she continued to buck a system that wanted to squash her thoughts, ideas, and writings. There are days when I feel trampled upon and silenced, now I have a role model to turn towards. I will remember her strength as I trudge against adversity.

One more statue to help dot the landscape with monuments of the matriarchy.