“It is often the small steps, not the giant leaps, that bring about the most change.”

I had, just days before the Queen’s death, meandered along the Long Walk to Windsor Castle, strolled the Royal Mile from Edinburg Castle to Holyrood Palace and witnessed the lovely tribute to Princess Diana in Kensington Palace. I also had the pleasure of beholding the Crown Jewels at the Tower of London and the displeasure of being turned away from the gates of Westminster Abbey .

Don’t even get me started on the hours I spent watching The Crown on Netflix or the book I read by Robert Hardman as I tried to absorb every tidbit of knowledge I could find on the Queen as part of my preparation for a trip to Great Britain. And because I did all these things, with gusto, I might add, I felt as if I had known the Queen.

But can a Royal, and one as no-nonsense, straight-laced and closed-off as Queen Elizaeth11, ever be knowable?

I like to think so. Maybe it was her husband, or sister, son or grandchild that knew her best. Could be, it was one of her many prime ministers who knew what made her tick. Perhaps it was one of the many journalists and reporters who spent a lifetime commenting on her every move that gave them the “real” scoop on the inner working of her mind.

While we don’t know everything about Queen Elizabeth, we do know some things. We know she was crowned in Westminster Abbey at age 27 and reigned over the United Kingdom and other Commonwealth realms from 1952 to her death in 2022.

We know she married Philip, Prince of Greece, in 1957, and from what we surmised, she loved him dearly. Together, they had four children, the eldest, of which, Charles, became King.

We know she has numerous grandchildren, and while she loved them dearly, as grandmothers do, she didn’t appear to be consumed by them. We know some of her beloved grandchildren were cause for concern, but as the queen, she carried on, in spite of any kind of unpleasantries.

We know she had a younger sister, Margaret, and like most sibling relationships, they had their ups and down, but at the end of the day, the love remained.

We know she weathered many scandals, set-backs, and crises that would send many of us to our beds, hiding under the covers, while we waited for the dark days to pass. But we know that wasn’t her style.

We know, she along with her royal family, owned at least thirty properties. We know Buckingham Palace was her headquarters, Windsor Castle was her country home, Balmoral her summer home, Sandringham Estate her holiday home, Holyrood Palace her Scotts home while Hillsborough was her Irish home.

We know she had numerous statues erected in her likeness. There’s one in Gravesend, Canterbury Cathedral, Windsor Great Park and one in the Governor’s House in Adelaide. We know a statue in her likeness was toppled in Canada after 1,000 bodies of dead indigenous children were unearthed. We know she was aware she wasn’t everyone’s “cup of tea” but that she strived to be fair and just to all she reigned over.

We know she had to be “seen to be believed.”

We know the country mourned her. We know her funeral, although extravagant beyond measure, touched the world’s heart.

We know will not see a queen reign Great Britain in the foreseeable future.

We know she died on Sept. 8th.  But I know it was on the same date my mother passed away, nine years before. Two queens. Mourned. Loved.

We know she will rest in peace.

We know more than we thought we knew, but not nearly as much as we’d would’ve liked.

We know she will be remembered. We know her statues will continue to dot the landscape for years to come. Statues not only memorialize women of greatness but they make them immortal. 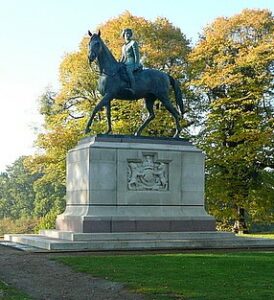 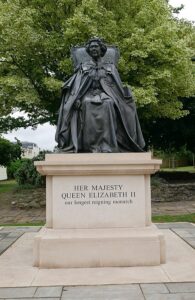