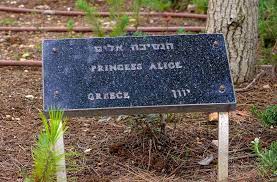 (otherwise known as the mother of Prince Philip, Duke of Edinburgh)

If you’re a fan of “The Crown” now steaming on Netflix, perhaps you, along with countless others, have fallen in love with Princess Alice during a heartwarming viewing of Episode 4. If not, I’ll enlighten you as to why Princess Alice, also the mother-in-law of Queen Elizabeth 11 and great-granddaughter of Queen Victoria, is worthy of being included in our monuments of the matriarchy. Just to be clear, I’m not recognizing her for her royal ancestry but because she is a woman of substance, in her own right.

Misunderstood for most of her life, Alice was born congenitally deaf. Since nobody figured it out for years, she had to teach herself to lip read. As a speech-language pathologist, I can’t stress how important hearing is in the development of language and the impact it has on functional communication. Members of the Royal Family thought she was intellectually-impaired because when measured against people with intact hearing, she fell short. She is often considered to be a blot on the Royal Family.

Even so, they still married her off to Prince Andrew, son of the King of Greece. She lived in Greece for years while she gave birth to four daughters and finally, a son. But in 1922, the Greco-Turkish caused her to flee to safely. A few years later, she was diagnosed as having a nervous breakdown and was institutionalized. She became a patient of Sigmund Freud who claimed she suffered from paranoid schizophrenia as well as other patriarchal ailments I won’t discuss here.

She was finally released from institutionalized living in the 1930’s and went back to Greece where she lived a life of charity. Here’s when her life takes a different turn. During WW11 she harbored Greek Jews and kept them safe from capture. It’s reported that she pretended not to “hear” the authorities when they questioned her. They soon grew tired of interrogating her and left, never to return again. In the 1940’s she founded St. Mary Magdalene; a Greek Orthodox sisterhood for nuns who served the needy. Pictures of Princess Alice at the wedding of Philip and Elizabeth show her in a nun’s habit, which only fueled the rumor of her insanity. In 1966, she returned to Buckingham Palace and Windsor Castle, her birthplace, to live out her final years. She became close to Princess Anne. Fans of the Royal Family like to think Prince Philip finally embraced his benevolent mother.

I looked high and wide for a statue of this ahead-of-her-time woman but couldn’t find one. I did, however, find her tomb in Jerusalem. She wanted to be buried next to a beloved aunt. I also found a tree planted in her honor at the Yad Vashem Holocaust Memorial. In 1993, she was deemed Princess Alice Righteous Among Nations on behalf of her work during the holocaust. In 2010, the British government called her a “Hero of the Holocaust.”

Still no statue. I wonder what it will take to commission a statue for a woman considered to be the “rarest creature among the whole Royal Family who suffered more and did better than the whole royal family put together.”

Rally up. Start a campaign. Let’s put Alice of Battenberg on a pedestal. The world needs her to be memorialized in stone for all eternity. She demonstrated a “turn the other cheek” lifestyle that is rare and beautiful. If that isn’t worthy of bronze, I don’t know what is.