Harriet, or Hattie as she was known to her friends, is now considered to be the first African America woman to publish a novel in North America. Her novel, The Nig or Sketches from the Life of a Free Black was published (anonymously) in September 1859 by a publishing firm in Boston, Massachusetts. Harriet was smart, copyrighting her novel and then depositing a copy in the Office of the Clerk (Mass.) But unfortunately her novel remained wildly unknown and sat, mostly undiscovered and unread, for over a hundred years.

But as luck would have it, a scholar, Henry Louis Gates, Jr. discovered her work in 1982 in the copyright archives. Immediately, academic arguments ensued claiming that Hattie’s book was more autobiographical than fiction, ruling it out as a true novel. These naysayers believed that a book by Julia Collins, The Curse of the Caste/Slave Bride, published in 1865, was the first authentic novel because it was not rooted in truth as Harriet’s book had been. However, counter arguments claimed that most novels at the time, specifically first novels, were autobiographical in nature (see Little Women).

Harriet was born of mixed heritage; with Irish and Black roots and lived with her parents until orphaned. At that time, she became an indentured servant (as was often the case with free Blacks and Irish immigrants) where she was likely physically and mentally abused. Yet Harriet persevered and found a way into the public lecture circuit where she was paid to talk about her experiences. She only wrote one book, but that was enough to elevate her to literary fame.

The life-sized bronze statue of Harriet, erected in 2006, can be found on the New Hampshire Women’s Heritage Trail. Harriet is also considered to be one of the “27  Influential Women in New Hampshire.”

As a writer, I’m glad to report that Harriet finally got her due as an author. I’m sorry she didn’t live to see it. I know how hard it is to get published, and I can’t imagine how difficult it was for Harriet to overcome an industry that was not only rooted in sexism but racism as well. Kudos to this ass-kicking woman who not only smashed the glass ceiling but plowed through the racism hurdle. On another note, my son is planning on moving to New Hampshire in the near future. When he does, my second stop will be to visit Harriet’s statue. I can’t wait to grab a selfie with another one of our wonderful monuments of the matriarchy.

Readers, please continue to be on the lookout for other women that have been memorialized in stone, bronze, silver, wood, or glass. Together we can dot the landscape with amazing women who rock. 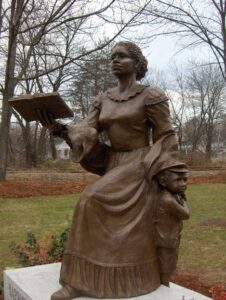