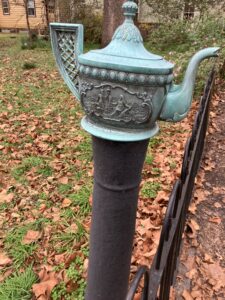 “we resolve not to conform to ye pernicious Custom of Drinking Tea until the Tea act is repealed.”

People often ask me how I choose which statue to write about. I answer with “it’s the statue who chooses me.” I know that sounds odd but think of it like this: when the writer is ready, the statue will come.”

I decided to write this blog after watching a CBS Sunday Morning edition that highlighted monuments of the matriarchy, or lack thereof. I was intrigued. Why were only 8% of all the statues in the United States of women? I was not the only one bothered by such a discrepancy but I felt compelled to explore this issue.

Sometimes the statues speaks to me after reading a book, newspaper or magazine article about the woman (see Rachel Carson, Eleanor Roosevelt) or from a serendipitous visit (see Waving Girl, Marie Curie ). Other times I write about a woman I’ve long admired (see Joan of Arc, Ruth Bade Ginsberg). Then there are times, like that of Penelope Barker, that sprout from another article I’m working on.

I was visiting Edenton, NC for both pleasure and business when I happened upon Mrs. Barker. Edenton, a small southern town in coastal North Carolina, hosts an annual Candlelight Christmas Tour and I was covering the event for a local community magazine. It was there I discovered Penelope Barker, a loyal patriot of the American Revolution, (the welcome center is named after her) and her courageous show of opposition.  In October 1774, Mrs. Barker organized the first recoded political demonstration by women in America. All in all, Mrs. Barker rallied 50 women to sign a resolution boycotting British tea. The British East India Tea Company, which held a monopoly on tea, was placing a high tax on tea. Although Mrs. Barker’s efforts, along with the Boston Tea Party, were applauded in America, she was mocked in London (see political cartoon where the women are portrayed as having loose morals).

However, Mrs. Barker’s brave act went mostly unnoticed until decades later a naval officer purchased the cartoon and decided to follow the trail of tea. Once he uncovered the story he was instrumental in erecting a statue to commemorate the event. Finally, in 1827, a statue of a teapot was commissioned. Mrs. Barker’s tea boycott is now known as the Edenton Tea  Party.

Maybe one day a life-sized statue of Penelope Barker will be erected. But for now, we’ll have to make do with the Penelope Barker Welcome Center and a teapot. It is nice to know that women, like Penelope Barker, have been speaking out against injustice for eons.  We just need to make sure they’re given credit for their hard work.

I hope you’ve been finding these glorious women in your everyday world. Maybe you’re even one of them. Let’s continue to dot the landscape with women who make the world a better place. A life-sized statue is one way but there are other options: puppets, smaller statues, objects, houses or museums or even performance art. Go out and find these wonderful women. If you come up empty, create a memorial or advocate for one. After all, women rock! So do their stories. 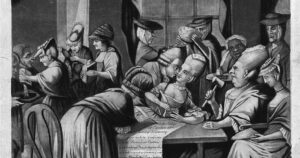