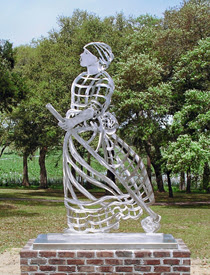 Situated in Brookgreen Gardens, South Carolina, which is located on the Low Country Trail, are four stainless steel statues by Babette Block, designed to reveal a story about each person’s role on a low-country planation. The trail sits on a rice field overlooking a hill, which separates the plantation from the slave quarters.  The hill symbolizes the crest between home and work, or between freedom and bondage. The statues are stainless steel and when the light shines on them, they look like a glorious beam of hope.  The museum offers a 30-minute narrated tape, which is highly recommended.

One of the statues is a Gullah-Geechee woman, carrying a basket made of sea grass. The baskets were designed by women and each one is representative of their distinct personality. Basket weaving is a craft, an artform and a cultural tradition. It was a way for women to express their stifled creativity. Also, the baskets are often shown atop the head of a Gullah-Geechee woman and symbolizes the heavy load that she carried. Brookgreen Gardens also has a Reign of Rice series that highlights other Gullah-Geechee traditions. If you travel along Highway 17 near Mount Pleasant, SC, you can see that sea grass basket weaving is still utilized today. Some men are also embracing the art form.

Much has been said today about removing statues that glorify the confederacy and their aura of southern dominance. But these clusters of statues are different. First off, it’s nearly impossible to find a female Gullah-Geechee statue anywhere in the United States. This statue gives voice to the voiceless. We need to hear what she has to say, even if it makes us flinch. The statue is a powerful testament to the resiliency of the matriarchy and a reminder of the heavy load that women carry.

The Gullah-Geechee culture needs to be more widely known and admired. It is the opinion of this blog that history must be preserved with respect and integrity, in order to right the wrongs that have been committed by our ancestors. The statues are riveting and very humbling. Come and see for yourself.