I don’t think of all the misery but of the beauty that still remains.” A. Frank

Anne Frank’s diary is a world treasure. Despite being only thirteen-years old when she took pen to paper, her words resonate with people of all ages, in all parts of the universe. She deserves to be memorialized in stone and placed on a pedestal. While she’s honored in many historic landmarks, this blog will focus on two of the more popular.

Erected in Founder’s Park Plaza at the National WW11 Museum in New Orleans sits a life-sized statue of Anne. Sculpted by Studio EIS, Anne is depicted holding her diary to her chest with both hands. A direct quote from her diary is nearby, “Someday this terrible way will be over. Surely the time will come when we are people again, and not just Jews.”

Imagine being in Anne’s shoes. She was a girl, on the brink of adolescence, when  suddenly she’s forced to hide in two small rooms, hidden behind a bookcase, and shut off from the life she once knew. No television, no communication with the outside world, no music. Just a few books and a measly stack of paper and pencils, and the cramped company of seven other people, some of whom she didn’t get along with, even in the best of times. But Anne had hutzpah and made the most of it -by looking out onto a horse-chestnut tree – and by starting a diary, which she called a “strange experience.” She wrote even though she was sure “no one will ever be interested in the musings of a thirteen-year-old-girl.” But that didn’t stop her moxie from pouring out onto the page. “Oh, well. It doesn’t matter. I feel like writing.” I’m glad she felt propelled to write in a diary. Otherwise we never would’ve known about this brave girl. Bravery gets noticed. In Anne’s case, her strength of character was memorialized in bronze, which allowed her to take her place among the other impressive monuments of the matriarchy.

Still, being the face of humanity has its downsides. A monument of Anne known as the Idaho Anne Frank Human Rights Memorial, that resides at the Wassmuth Rights Center, was defaced in Dec. 2020 with swastikas and the harrowing words “We are everywhere.” Also tarnished was the freedom spiral.  Unfortunately, this wasn’t the first time the complex was branded with graffiti of Anti-Semitic messages and racial slurs. A question asked by the media was, “Is this what we’re becoming?”

When Anne was alive she’d seen more trouble than most of us. Did she need to be victimized, even in death? After her capture by the Gestapo, she spent twenty months in captivity, only to be turned into the authorities by an anonymous informant, who is said to have been an employee of her father’s. Sadly, Anne didn’t last long at Auschwitz. She died of starvation and dehydration, weeks before the concentration camp was liberated. Her diary was found in the annex by a family friend. I’m not sure if you know this but the authenticity of the diary was questioned. Surely, the naysayers speculated, an older, more erudite person wrote it. I, for one, believe it’s the real deal. When faced with death, I bet our pens are freed from the confines of the page and we speak the truth. Verse after verse is wrangled free and without a censor and judge, the words touch detach themselves from the core our souls. As Anne said, “I continue to sit with the open book in my hand and wonder why I was filled with so much anger and hate that I had to confide it all to you.”

But Anne lives on, in her journals and statues How will you live on? Have you accomplished anything that is statue worthy? I know I haven’t, at least not yet. But I’m not going to give up on myself.

Rise up ladies. Do something great. Be heard. Write your hearts out. The world needs more women of courage. I imagine a future where there are millions of brave women dotting our landscape. Now that’s a beautiful sight. 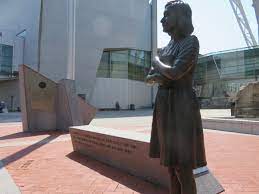 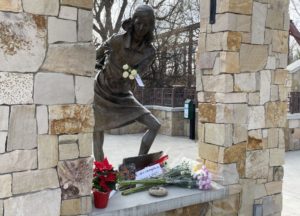