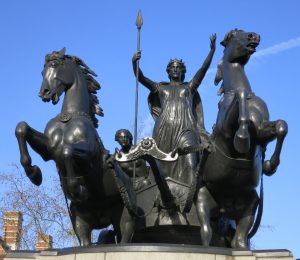 If you’re like me, you’ve probably never heard of this statue, located in London, close to the House of Parliament and within selfie distance from The London Eye. My cousin, who has been to London numerous times, told me about Boadicea. In fact, she and I along with my husband, were supposed to tour England during the summer of 2020. But the coronavirus had other plans for us. We’re hoping to go in July 2021.

The bronze statue is known as a sculptural group, a cluster of statues displayed as one unit. This cluster contains Boadicea, her two daughters, her chariot and two horse. It’s a massive monument and you’d think it would be hard to miss, but according to  the blog, “Stories of London,” and the expose, “Carve Her Name with Pride,” tons of visitors are distracted by other tourist attractions after they’ve walked across the Westminster Bridge. How dare they!

Why should we pay homage to Boadicea? For starters, she’s considered a British folk hero, one that has songs, sonnets, and movies highlighting her accomplishments. Enya, the lovely Irish songstress, has  written a musical score, “Boadicea,” in her honor. In 1782, William Cowper, wrote an ode to her. “Rome shall perish- write that word. In the blood that she has spilt.” And in 2003, “The Warrior Queen,” staring Alex Kinston, played in the United Kingdom. Also, with her long, red hair and reported feats of courage, she sounds to me as though she’s the inspiration behind the Celtic heroin in the Disney animation, “Brave.”

What did she do to deserve a statue? Back in 60 AD, when Britain was predominately ruled by women, she led an uprising against the Romans that resulted in the destruction of 2 or 3 Roman settlements and almost single-handedly drove the Roman Empire off the British Isles. She was married to Pratsutagus, King of the Iceni tribe, and upon his death, she became the leader. She was of royal descent and when the Romans questioned her right to the throne, she had her soldiers paint themselves blue to frighten the enemy. That strategy must’ve worked because during her reign, 75,000 Romans perished. Unfortunately, after fighting the good fight, she succumbed and died in 61 AD. Legend says that she drank poison to avoid capture.

The impressive London statue is considered the magnum opus of sculptor Thomas Thorncraft, who started chiseling the huge bronze cluster in the 1850’s, but it wasn’t erected till 1902. Inscribed on one side is this quote: “Regions Caesar never knew-thy posterity shall sway.” Don’t miss your chance to visit history- a warrior queen from 61AD is something you don’t see every day. I plan on visiting England in July 2012; hope to see you there, cameras in hand.

Boadicea is one of the monuments of the matriarchy you don’t want to miss. Women Rock! Stories & Statues. If we don’t tell Boadicea’s story, who will?