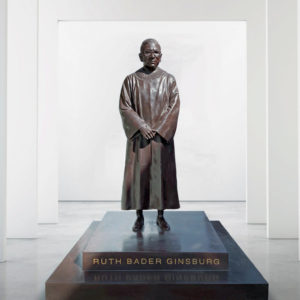 ” I ask no favor for myself. All I ask our brethren is that they take their feet off our necks.”

A seven-foot statue of Ruth Bade Ginsburg – a woman of such significance that she’s known by her initials, along with word notorious—has been unveiled in City Point, NY on March, 2021. Located inside the Flatbush entrance in Brooklyn, the statue was created by husband-and-wife sculptors Gille and Marc Schattner. Notorious RBG can be found along with ten other statues of inspirational women such as Oprah Winfrey, Jane Goodall and Gabby Douglass, in the “Statues of Equality” exhibit. The exhibit raises the percentage of women statues in New York from three to ten percent. Yes, ladies we’re finally making some headway in our effort to reach our mission of dotting the patriarchal landscape with more monuments of the matriarchy.

The statue had been unveiled during Women’s History month as a memorial to her posthumous 88th birthday. I’ve already noted RBG once in this blog when I commented on a jabot or ornamental collar that had placed on the statue of Fearless Girl upon Ruth’s death. Ruth often wore collars to add meaning to her dress (some were majority collars, other dissenting collars).

And Fearless, she was, along with being the “great dissenter” or “great equalizer.” RBG argued many judicial battles in the pursuit of racial and gender equality. While Ruth rarely used the term women’s right, she did say she fought for the “constitutional principles of the equal citizenship stature of men and women.” One of my favorites quotes from her was, “Women will have achieved true equality when men and women share with them the responsibility of bringing up the next generation.” I’ve personally observed this to be much more the norm than it was during my childrearing years. My son is an equal co-parent with his wife. Something his father wasn’t. I’d like to take credit but I think it’s generational and/or societal  progress. I credit women like RBG, and men like her husband.

I  haven’t visited Ruth’s statue yet but now that COVID incidences are declining, I see the possibility of travel in my life once again. I can’t wait to touch a piece of her greatness. RBG’s statue will shine bright, a beautiful reminder of the wondrous contributions she made to the field of gender equality.

Who will fight the good fight now that she’s gone? I hope it will be all of you. Join me. Everyone.