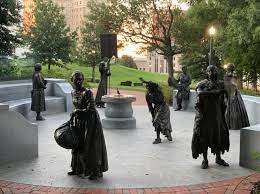 Voices From the Garden

Seven statues of women who’ve shaped the Commonwealth of Virginia have been unveiled in October 2109 in Capital Square, Richmond, VA. There are also names of 230 other women of influence etched along the walls of the exhibit. Five more statues are in the works.

This has been an on-going project that focused on collectively recognizing the voices of women who’ve not been given their due in mainstream America. These women, from the past 400 years, have been for the most part, overlooked. While many have been given a line or two in a few history books, it’s not enough. We need to amplify their voice. From all walks of life these are extraordinary women who’ve risen above stereotypes, prejudices, injustice, poverty, race and sexual discrimination, adversity and apathy to break barriers and smash glass ceilings. Their accomplishments are numerous, vast and impressive.

The women exhibited haven’t been placed on a pedestal, riding a horse, or carrying a weapon; this way visitors can look them in the eye. Take a good look. These are the women whose shoulders we’ve been standing on for four hundred years. Listen to their narratives. It’s time to bring real women to the table. And what an amazing table it is.

Collectively, these women rock. I applaud the state of Virginia for stepping up to the plate and creating such a visual display of the accomplishments of women. Day by day, year in and year out, across decades, and centuries, these women worked to make their community a better place to live, often without notice or reward.  In doing so, they made the state fuller and richer. The country benefited too. They are true monuments of the matriarchy. But these woman are no different than most of us reading this site. Just like the statues, we come from all walks of life and bring a different set of skill sets. But if we put our collective heads together, we can build a better world. One statue at a time.