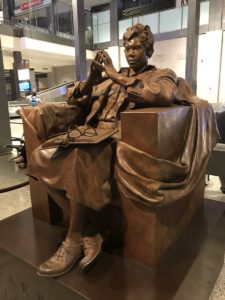 “We are a people in search of our future.”

A friend of mine was traveling back from California when her flight was diverted to Austen, Tx. Understandably, she was not happy. But when she was greeted by a bronze statue of Barbara Jordon, the first woman to deliver the keynote address at a national convention (Democratic, 1972) she knew a higher power must’ve orchestrated the layover. As a crusader of women’s rights, especially for IPOC, my  friend right then and there pulled out her phone and listened to two of Barbara’s landmark speeches. First, to the speech given to the democratic convention, and then to her now famous testimony in front of the US House Judiciary Committee on the impeachment articles of the constitution regarding Richard Nixon and the Watergate breech. If you’ve been following this blog, you’ll  know that while I’ve written about twenty or more statues of the matriarchy, I’ve never once begged you to listen to them so you could hear their voice. Please! Forty-seven years later her speech about impeachment made my friend cry in the middle of a busy airport. It also brought tears to my eyes, as it will yours.

Barbara is one of the most accomplished women in modern history. She’s the first African American to serve in the Texas Senate after the Reconstruction; the first African American elected to the US Congress from the south; and the first African American to serve as governor of Texas ( if only ceremonial, for one day). She was a civil rights champion, a proponent of immigration reform, a college professor and a commanding presence, bar none. Barbara captured me (and zillions of others) with her powerful voice, great oratorial skills, and her uncanny ability to break down complex moral, civil, and legal issues into language everyone can understand. Please (for all that is sacred to you, listen to her speak). Remember, we are stingy when it comes to creating statues of women, so men in power must also be singing her praise.

The statues in the airport was sculpted by Bruce Wolfe and it suits her well. She is seated, fingers pressed together as though in deep thought, with a book on and a pair of glasses on her lap. I’d call her a female Barrack Obama, but comparing this exemplary woman to a man –no matter how however wonderful the man may be – demeans her. She is, in my opinion, one of the greatest women of the 20th century. There should be many more chiseled likenesses of her throughout the country. You can find another statue at the University of Texas at Austen where she taught. But perhaps you could start a campaign to raise funds to bring her to your city. Your mother, wife, daughter, granddaughter, niece, and friend will thank you.

Statues of women dot the landscape with history, female achievement, and humanity. But they’re also our future. They inspire us to greatness.