“The future belongs to those who believe in the beauty of their dreams.”

Located at Riverside Park in New York City on seventy-second street sits a monument honoring the former first lady and renowned humanitarian. The sculptor was created by Penelope Jencks and erected in 1996 and presided over by Hillary Rodman Clinton. The striking monument depicts Eleanor standing, legs crossed at the ankles, hands perched to her chain, as if in deep thought.

I’ve always considered Eleanor to be the more unattractive partner to her more dashing cousin and husband. But since Franklin lost use of his legs, Eleanor attended to the business at-hand as though she were born for the job of political attaché. Not only was she good at her job, she excelled.

Recently I was given a writing prompt for a children’s book writing website and we were given the task of coming up with a 250-word story. The prompt was none other than the quote above for which Eleanor has often been credited. However, I couldn’t find anywhere that she actually said those exact words (also noted on quote investigators). There is a lesser quote from her syndicated newspaper column from 1957 where she said something about the dreams of those who drafted the US Declaration of Independence and the US Constitution.

But Eleanor had more to say. Lots more. On many topics. And people began to listen. 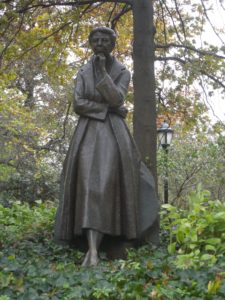